When one Washington, D.C. area restaurant re-opens for dine-in customers at the end of the month, the scene may not be as lively as diners have come to expect.

That’s because The Inn at Little Washington in Washington, Virginia will be enforcing social distancing by having mannequins sit at empty tables.

According to Eater, chef Patrick O’Connell hopes that the inanimate guests will help the three Michelin-star restaurant feel less empty, even while it has considerably fewer diners. 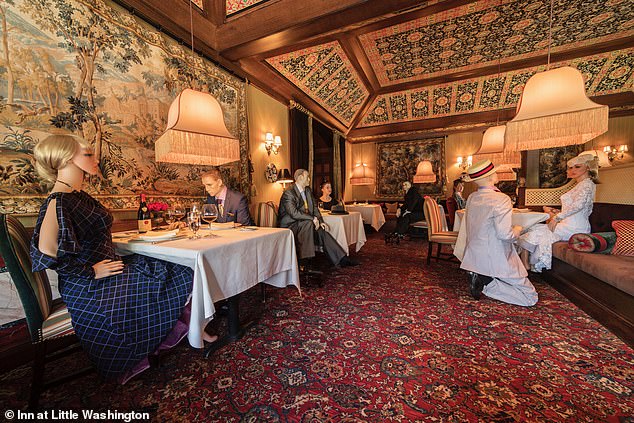 But chef O’Connell and his team have already begun setting up, and photos inside the restaurant show mannequins in stylish 1940s-era clothes obtained from Shirlington’s Signature Theatre.

The mannequins are seen sitting at the tables, posed to look like they’re enjoying a night out at the restaurant.

A spokesperson said that the immobile guests will align ‘within the whimsical vein of the Inn’s reverently irreverent approach to hospitality.’

O’Connell also said he thinks the mannequins will put customers at ease.

‘I think it would do people a world of good to reduce their anxiety level when they come out to a place which is still unaffected, because if you watch your television, you think that there isn’t such a place under a bubble,’ he told the Washingtonian.

What’s more, staff will be dressing up for the re-opening in specially-made masks designed by O’Connell himself, which have Marilyn Monroe smiles and George Washington chins.

The restaurant has shared images of the new scene inside on Instagram, where the mannequins have been met with mixed reactions.

While some called it ‘great,’ ‘genius,’ and ‘very cool,’ another said he couldn’t wait to get back to the restaurant.

Still, a few critics called it ‘beyond creepy, with one writing: ‘This is a horror film waiting to be made,’ a commenter wrote.

Halsey Broke Her Ankle in a Pretty Dumb Way→