The economic consequences of the coronavirus pandemic has been severe and far-reaching—particularly for those who work in the service industry or gig economy. Business closures and massive layoffs have understandably left many Americans with extra anxiety, as they worry about paying rent, buying food, and generally surviving the crisis without a stable income.

Thankfully for some Taylor Swift fans, the singer-songwriter has alleviated some of that stress.

On Wednesday night, a number of Swifities took to social media claiming they had received $3,000 from the 30-year-old artist as well as a message of support. Holly Turner told E! News she had received the money shortly after opening about her financial struggles via Tumblr. Turner said she works as a freelance music photographer in New York City, but hasn’t landed a gig due to the state’s stay-at-home order and the cancellation of major events.

“I wasn’t going to be able to stay in my apartment after May, if it weren’t for this,” Turner explained. “I have been working my entire life to be able to live in New York City and I thought that was going to be taken, and she saved that for me. So, I am just so, so, so grateful.” 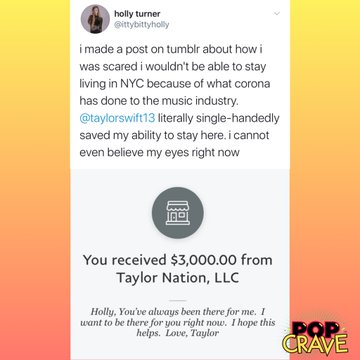 Samantha Jacobson was also stunned Wednesday night when she realized she had received $3,000 from Taylor Nation, LLC. Jacobson shared a Tumblr post explaining why she was unable to donate to the Feeding America organization that Swift had promoted: “I wish so badly that I could donate to the link Taylor provided, but because of COVID-19 my job, my only source of income, is closed for a minimum of 30 days. I have no job, no income, no way to pay my bills rn. If anyone happens to be able to donate and has it in their hearts to do so, anything really really helps with bills right now.”

According to Entertainment Weekly, Jacobson lost her job as a cocktail server at Disney World in Orlando; the outbreak prompted the owners of a third-party bar to close its doors for about a month, leaving her strapped for cash.

A fan named Leah also received $3,000 after making a public plea for financial help. “I’m literally buying food with change leftover in my purse right now and I won’t be able to get any food or gas once the change is gone,” she wrote. “I’m so scared. I’ve never been in a situation like this before. I’m desperate.” 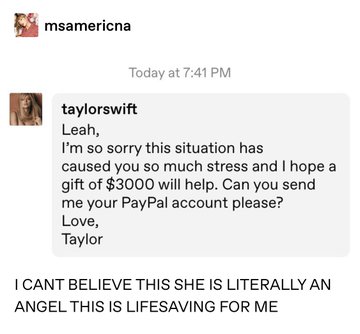 Swift’s team has not responded to outlets’ requests for comment.

Ariana Grande has also reportedly gifted money to fans who have been struggling financially due to the pandemic. “She reached out and took care of my salary for the month,” one recipient said, per Page Six.

FOR KIDS: Easter Magic at Home!→

OJ Thinks Carole Baskin Killed Her Husband…So She Definitely Did→

April Fools’ is Canceled (Not a Joke)→