While the turkey is considered the most iconic part of a Thanksgiving dinner, most can agree that it is not the best part of the meal. And, with Thanksgiving right around the corner, Google trends revealed which state prefers which side dish the most.

Career site Zippia recently released the map of peoples’ favorite Thanksgiving sides by state. The company utilized Google trends to determine which Thanksgiving side each state eats a disproportionate amount of.

“We examined over 20 Thanksgiving classics. Some controversial decisions were made, including counting gravy as a side,” Zippia wrote. 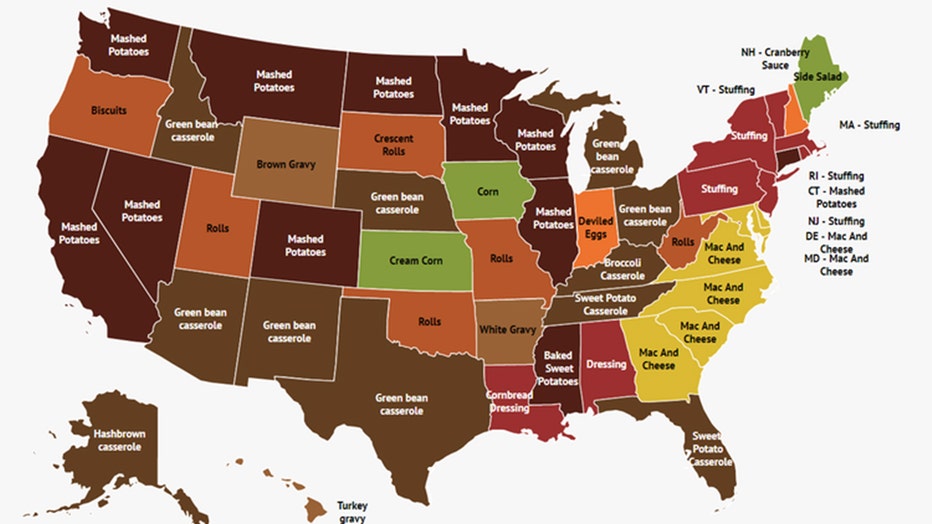 Map of most popular Thanksgiving sides by state (Zippia)

Zippia looked at the month of November 2019 to make determinations, citing that traffic for most Thanksgiving sides increases drastically on Thanksgiving day, as people Google how to prepare stuffing or make mashed potatoes.

In New York, stuffing was the most sought-after side. Meanwhile in California, mashed potatoes reigned. In Florida it was all about the sweet potato casserole, and in Ohio, the states most searched side was deviled eggs.

Only three states were fans of vegetables: Maine, Iowa and Kansas.

“The results? Thanksgiving may be called Turkey Day, but maybe it should be called mashed potato day. Or mac ‘n cheese day,” Zippia wrote.